Sinkholes should only be approached by professionals as they can be extremely dangerous, especially when they form on the drive lane of a multifamily community. In coordination with the property owner, AQUALIS’ team of stormwater specialists were able to act fast and rehabilitate the stormwater system.

When residents of this multifamily housing complex notified the property owner that sinkholes had emerged in the drive lane on the grounds, the site was immediately blocked off. The property manager reached out to AQUALIS for assistance in addressing this stormwater deficiency.

Two sinkholes had formed in a drive lane above large diameter conduits. These pipes are designed to guide stormwater runoff and have faced years of wear and showed signs of extreme corrosion that inevitably lead to a displaced retaining wall. No longer adequately set, stormwater was misguided around the outside of the conduits rather than through them. These compromised pipes led to the destabilization of the surrounding surfaces and stormwater erosion created pockets of subsurface caverns. Eventually, the road above these hollows became so weakened they imploded, revealing the sinkholes.

Often a consequence of other stormwater system failures, sinkholes require immediate action and should be approached with the utmost importance and highest safety precautions. For example, a sinkhole that appears small on the surface may not reveal the entire larger cavern underground. As a result, areas immediately surrounding the sinkhole could be destabilized and at risk of further collapse. The location of this sites’ sinkholes added an extra sense of urgency as the sinkholes posed a threat to residents, employees and any visitors that may need to travel along the commonly frequented drive lane. No matter the location, never approach the edge of a sinkhole.

Sinkholes can also pose a high environmental risk. Caused by eroded cavities, the size of a sinkhole’s cavern can give an idea of the amount of displaced sediment that has washed into local bodies of water. According to the North Carolina Department of Environmental Quality, which monitors the local Lower Crabtree Creek Watershed, over 55% of assessed waters in the Watershed are impaired. The exact pollutant(s) that have caused the degradation of aquatic life in Marsh Creek, the water body adjacent to the sinkhole’s site, is not known. However, according to the EPA, sediment is the most common pollutant in freshwater systems. Increased sediment from erosive incidents, like sinkholes, raises water turbidity, blocks sunlight and kills aquatic life.

Understanding the urgency, AQUALIS got to work right away. 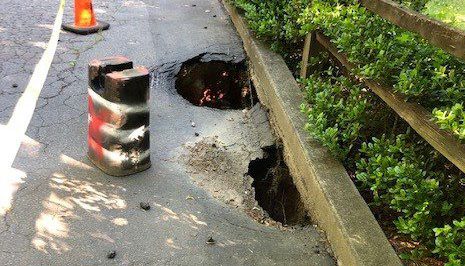 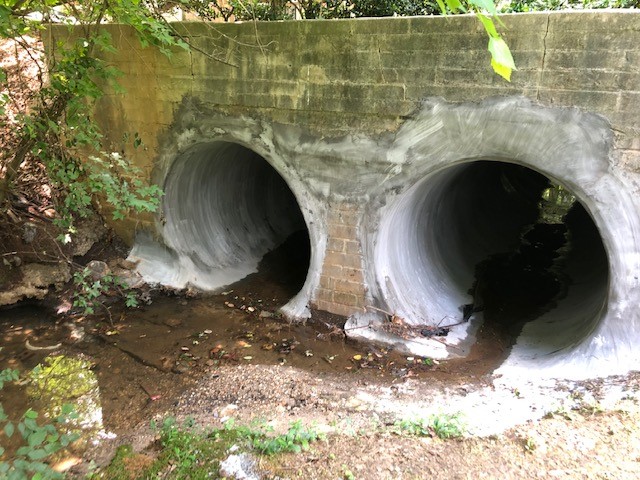 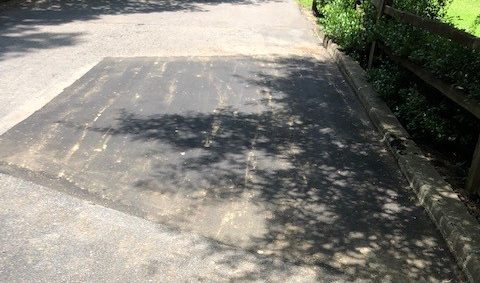 AQUALIS engineers performed a centrifugally cast concrete pipe lining repair on the pipes as the pipes were still in a healthy condition. Using this technique, AQUALIS professionals created a 1.5” concrete pipe within the existing conduits. This process seals the pipe from further damage and increases the stability of the conduits to prevent additional stormwater from being diverted around the pipes.

Once the conduits were stabilized, grout was injected around the pipe headwalls and within the sinkhole to fill the voids and compact the soil, securing the pipe repair. Once the sinkhole was filled, damaged asphalt was replaced, and the entire drive lane was safe to travel on once again.

Understanding the danger and importance of swift action when it comes to sinkholes is important for everyone’s safety. Working with the property manager, AQULAIS was able to quickly resolve safety concerns for residents and the environment. While Marsh Creek and the greater Lower Crabtree Creek Watershed may not be healed from this one action, the waterways are one more stormwater system closer to healthy currents.

If a sinkhole is suspected on your property, contact AQUALIS to learn more about our dedication to root-cause identification, long-lasting repairs, and sinkhole-thwarting preventative maintenance services.